About a year later, David decided to expand the business to include trampolines and basketball hoops. A name change was in order. To give credit to the original business, he wanted to keep “swings'' in the name, but emphasize that we didn’t only sell swingsets. “Swings and Things” was considered next, but during the name change meeting people realized that it was actually somewhat difficult to avoid saying “swings n’ things” when you meant swings AND things. So we shortened the conjunction and added hyphens to produce the name “Swings-n-Things” because it felt closer to what a child might say.

Along with the name change came a new location in Sharonville. Throughout Swings-n-Things’ history, it’s been our policy that being able to play on sample models for free helps both children and parents choose the right playset, trampoline, or basketball hoop for their needs. But with a giant indoor playground full of playsets to climb on and trampolines to jump on, David realized that parents or clubs might want to rent out a space for themselves for birthday parties, celebrations, or other events. So our sister company Run Jump-n-Play was born. We expanded Run Jump-n-Play with other features like food, superhero guests, and inflatables and allowed it to thrive with its own marketing apart from Swings-n-Things.

Eventually we decided to move to our current location in Blue Ash, conveniently located off of the I-71 Pfeiffer Exit, right behind the Bob Evans. We also added an outdoor lot near the Tri-County Mall so we could be accessible to more families in the greater Cincinnati metro area, including Northern Kentucky and Dayton. We’re still selling swings and things, and hope to continue serving Cincinnati families by selling high quality outdoor play sets, trampolines, and basketball hoops.

Why are your prices so much less than other companies? Collapse

We sell our products at the best possible prices. We work hard to make sure you get the highest level of play value for your money.

Does my playset need staining when it is delivered? Expand

No, our sets come pre-stained from the factory. Re-staining the set every 2 years is recommended.

Do you offer installation for your products? Expand

Yes, we offer complete delivery and installation for all of our products. Our average installation takes 3-6 hours.

Can I install the playset myself? Expand

Yes, our playsets are designed to be assembled by mom and dad too. Most of the components are pre-built. There is no cutting required. Easy-to-read instructions allow you to install most of our sets in 3 to 8 hours.

What types of wood do you use? Expand

We offer a wide selection of redwood, cedar, and southern yellow pine depending on which brand you decide on.

Can I add on to my playset later on? Expand

What sets us apart from many other companies is our modular designs. You can start with a basic playset and add on as your children grow.

What type of site preperation is needed before installation? Expand

Choose a location with a 6’ perimeter around all sides of your playset. Site should be level although our sets have some adjustability for unlevel yards. We recommend you prepare an area with a resilient surface such as rubber mulch.

If we move can I take my playset with me? Expand

Yes, we offer complete tear down and re-install service or we can just dismantle the playset for the moving company and provide you with an assembly manual if you are moving out of state. 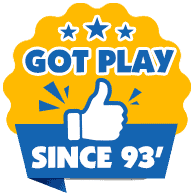